What is the Right Approach for Developing a Minimum Viable Product?

Home Articles What is the Right Approach for Developing a Minimum Viable Product? 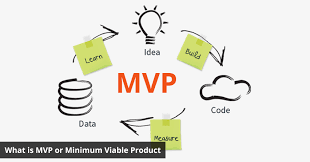 Before launching a business idea, entrepreneurs first develop a minimum viable product (MVP), and conduct various tests to validate or invalidate their assumptions about the idea.

For instance, if they have developed an MVP that is inferior to the final version, then the success of the test validates their idea. However, its failure doesn’t prove that their business idea is set to fail. If their MVP is much better than the final version, then success of the test doesn’t necessarily prove that their business idea will be successful but its failure will definitely invalidate it.
However, entrepreneurs generally choose the incorrect MVP: they tend to go with the validating MVPs and most of the businesses fail as they continue solving the wrong problem. Invalidating MVPs are precisely designed to prevent the same.

Two approaches to MVP
First type is the Validating MVP – which uses an inferior product than the imagined final version, whose success proves that the model will be successful but its failure on the other hand is inconclusive.
A classic Validating MVP is all about marketing an idea. Before entrepreneurs start working on their idea, they try to reach out to people who could be potential customers for their product. Then they try to sell them their product idea, which is to be developed yet. If the customers are ready to pay them today for the product they’ll deliver after a month or so, then they can certainly construct a profitable business from that income and they will definitely attain success in their business. However, test’s failure doesn’t necessarily invalidate their business idea.

For instance, Drew Houston released a Digg video for Dropbox in March 2008, which gathered a handsome 70K signups for a product, which hadn’t even been released yet. It sufficed in confirming that the product was market fit. Nevertheless, failure of the test wouldn’t have necessarily meant that Dropbox wouldn’t work. It could imply that the Digg users weren’t perfect as early adopters or that the quality expectations was even higher than expected, or that some other event had diverted users from sharing or watching the video. The failure of Houston’s validating MVP solely would’ve proved that only one of the ways of winning customers, i.e., through a Digg video, was a failure, not the entire business idea.

Second type is the Invalidating MVP – which uses a better product than the final product. Therefore, its failure certifies that the business idea is doomed but its success is inconclusive.

Most of the “concierge MVP” approaches fall under this class. In this approach, entrepreneurs develop a much better product at an unsustainably high price by personalizing it for each customer. If they are unable to get people to pay a sensible long-term price for the better product, it means that their business idea is set to fail.

For example, Jennifer Hyman and Jennifer Fleiss started Rent the Runway using this approach – they offered an in-person dress rental service to college students, where they could try on dresses before renting them. This was definitely a much better experience than renting online. If no one would’ve rented from them, then it would have confirmed that online rental would be a failure. However, 34% first and later 75% of women rented from them, which meant their invalidating MVP was a success. So they moved on to a validating MVP. They emailed a PDF of dresses to about 1,000 women, out of which 5% women rented dresses from them.

Although useful, using invalidating MVPs is possible only if better products can be developed in small batches, which becomes difficult when product quality is dependent on scale of use or when cheap-quality substitutes abound in the market.

Deciding between the two approaches
It’s ironical that the only successful MVPs usually heard about are validating MVPs, because in an invalidating MVP, people present better and improved version of their business idea and its success implies that no one would pay heed to their actual final product’s success. Consequently, they would probably think more of validating tests. But most businesses don’t succeed as people’s assumptions about client demand are wrong, owing to market risk.

Therefore, startups with substantial market risk should first run an invalidating MVP, to test if the customers would buy a better product, instead of running validating MVPs. This would prevent them from questioning why people aren’t buying – is it because the product isn’t yet satisfactory or the idea is flawed or just because they’ve been targeting the wrong audience.

Thus, it’s better to test the market risk first and if you are able to develop a “better product” and no one is paying for it then it’s time to move on.

But developing a “better” product early on is at times, impossible, especially when the product performance results from scale, like in multi-sided platforms, where the value proposition is entirely dependent on network effects. In such cases, it becomes compulsory for startups to run validating MVPs, like with Dropbox. However, it’s essential to predefine failure. Generally, this means failing to convince early adopters to purchase a product, after having built a fairly good yet inferior version of the product. This process normally takes much more time than similarly effective invalidating MVP.
Majority of invalidating MVPs are comparatively simple and most of them reveal people’s essentially flawed assumptions about client demand, sparing them a vast amount of time as well as frustration in engaging in multiple validating MVPs.

Gaining knowledge from MVPs
MVPs basically have twin goals: first, learning about the problems to be solved and second, driving risk out of people’s existing (hypothetical) business idea by testing their fundamental assumptions.
People need to focus largely on the second goal; however invalidating MVPs also incline to be more effective at first, as those “better” early products tend to be more similar to concierge MVPs, which give up scalability and unit cost for flexibility and performance. These tests replace human labor for technology, and the human element means they can collect more information from potential clients about their problems and our possible solutions.